Don't make me laugh. Why Hurricanes and Heatwaves are no laughing matter 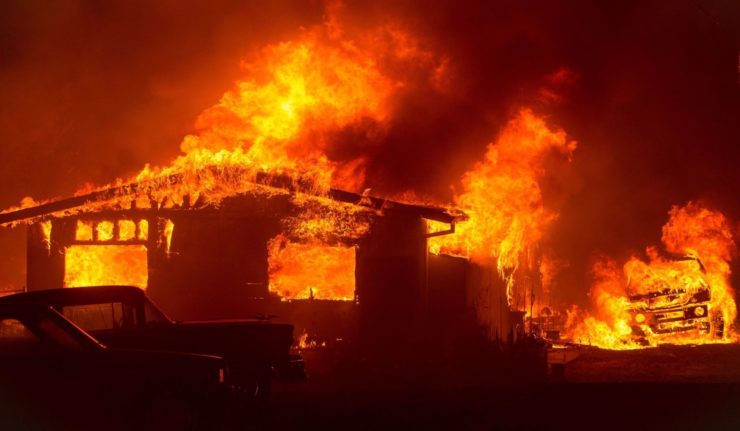 A heatwave in October is unusual in the UK. A heatwave followed by an ex-hurricane and dangerous winds is bizarre. Yet that is the weather forecast for the weekend. Weird weather has become the norm. It makes for great conversations, photos and headlines but climate change is no laughing matter.

Last night, I spoke with my sister and her voice was particularly husky. Not due to a late night party or a cough or a cold, she was at the airport in San Francisco. Thankfully she was on her way out of a region that is literally on fire.

Every morning she woke up and thought her apartment was burning down, the smell of smoke is so strong even though she is miles away from the fires. From her window she watched as the red plume of ash come in over the Golden Gate Bridge like a scene from a sci-fi movie. There was a permanent smell of BBQ in the air and at work, someone light-heartedly cracked a joke and people in need of some light relief joined in the fun. But quickly the laughter turned to coughing and horror as they realised the pollution in the air had travelled deeper into their lungs and their bodies defence mechanisms were kicking in. So everyone is walking around the streets with face masks on and saying to each other ‘Please, don’t make me laugh’.

What struck me most about the coverage of the fires in California was the dead. As whole neighbourhoods burnt down, calls went out for people to urgently evacuate the area. You cannot ride out wildfires by hiding in a basement. Nothing or no one is spared as flames, fanned by high winds and scorched vegetation, blaze across this famous wine-making region.

Due to air pollution, school children are only playing indoors and respiratory problems are high. A plume of smoke is over thousands of homes as well as Disneyland. The loss of property, wildlife and vineyards is devastating financially and emotionally. But the worst part was who was left behind. Journalists gathered round for updates and as the emergency services started to count the dead a pattern developed. Very few people ignore warnings to flee for their lives. Those who stayed were mainly the elderly, those who found it hard, if not impossible to leave, who are now ashes and bones. I did not sleep well after watching the news that night.

Both my parents are in their 70s and like many modern families we do not live near in the same neighbourhood. We stay in touch by phone and regular visits but where they live in the Home Counties everybody keeps to themselves. So who would look after them if any unnatural disaster should strike? If the woods we use to play in as children should catch fire? We grew up living in a temperate climate, safe in the knowledge there were no volcanoes, earthquakes or cyclones here. But global warming has changed all that. This weekend alone we have a heatwave followed by a hurricane!

This is not ‘normal’ but unfortunately it is becoming the norm. So as a civilised and caring society, if disaster did strike, would the weak and vulnerable be left behind? In the UK one in six homes are at high risk of flooding. Most people in those homes do not even know this, let alone receive flood alerts to warn them if danger is on the way. That window of warning is crucial to evacuate, to safeguard belongings, and can literally mean the difference between life and death.

As a country we have a lot to do to prepare for the impact of global warming and all the extreme weather events it will unleash in the future. Community ‘resilience’ is key to avoiding loss of life, injuries and also fixing the damage as quickly as possible.

This week, the wonderful MP, Claire Perry, has turned the tide of sceptics in the Conservative party and released the Clean Growth Strategy. It is a map of how we will grow our economy, deliver secure, affordable energy and crucially cut carbon emissions. The transition to clean renewable energy is unstoppable but unfortunately so is the damage from burning dirty, fossil fuels as the pollution stays in the air, trapping heat from the sun.

What we need now is a plan (and the resources) of how the UK as a society will adapt so that when the floods and fires strike, no one is left behind.