Time to Talk About the Weather: Downpours, Droughts and Fires 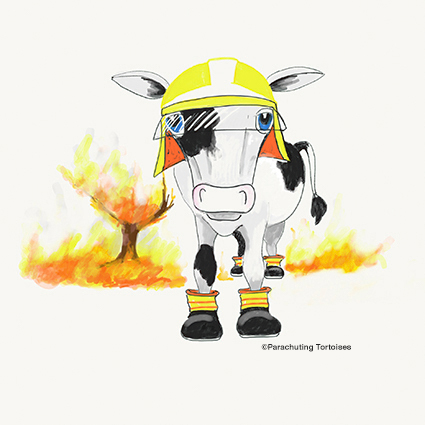 On the 18th of July 2017 a four-foot wall of water rushed through the tourist village of Coverack wrecking homes and businesses, just at the start of the crucial holiday season. Film footage showing an elderly couple rescued from their home by a helicopter was beamed around the world and was reminiscent of similar pictures taken at Boscastle when a flash flood destroyed their village in Cornwall.

Back in 2004, when the emergency services were scrambled to evacuate Boscastle, the scene of devastation was so great that the call went out to ‘save as many as you can’. Miraculously, in both incidents, no one was severely injured or died but many people lost their homes and their livelihoods.

Stories of neighbours coming out to help, valiant fire and coastguard crews and hundreds of council and Environment Agency workers entrusted with the clean-up operation show the best of British kindness and community resilience. But as storms and floods continue to feature in weather forecasts there is a wider discussion that is crucially absent from public debate. The causes of the increase in frequency of extreme weather events.

British summers are transforming from mild temperate affairs into mercury rising heatwaves. Whilst this is great if you are on holiday, extreme heat can be disruptive and dangerous. From melting tarmac to heat stroke, the impacts of excessive heat on human health, animals and infrastructure is severe.

Extreme heat also causes thunderstorms and flash floods, as the intense heat creates instability in the atmosphere when warm air mixes with the cold air above. In addition, in hot weather clouds can hold more water vapour (like in tropical rain forests) so when the heavens finally open, there is often a torrent of rain.

The irony is that in dry summer months, rain is desperately needed but the soil is so hard that the land cannot absorb most of this downpour. The water rapidly runs off the slopes and in such a large volume it overflows drains and rivers. Flash flooding is particularly dangerous in narrow, steep valleys like at Coverack, as the water is funnelled down and out to sea with immense force.

Sadly, predicting where lightening will strike is almost impossible and the lag time between deluge and destruction is tiny. Therefore the window of opportunity to warn residents so they can protect themselves and their loved ones is small. Flash floods are rapid, destructive and the frequency and intensity of them is increasing due to the hot weather. This is the fact that is missing from reports on extreme weather events.

Nearly every year the UK achieves ‘record breaking’ temperatures due to climate change. Greenhouse gases, like carbon dioxide, trap the sun’s radiation, which is why average temperatures are increasing year on year. The longer we rely on burning oil and gas for energy, the warmer the world becomes and therefore, the more frequent extreme weather events become.

Most major towns and cities are located next to rivers or seas, so the number of people and properties at risk of flooding on our island and around the world is immense. And it is not just flooding. Recently, excess heat fanned the flames of wild fires that killed over 60 people in Portugal and led to the evacuation, by sea, of an entire holiday village in Sicily. Like a mini Dunkirk, the local mayor appealed, through Facebook, for help from anyone with safe and reliable boats to rescue women and children first, from the beach to escape the advancing flames.

The good news is because we know the cause of this problem, the solution is simply to stop pollution. We urgently need to switch to clean energy like solar and wind to reduce the severity of global warming. The scale of the transition required is significant and increasingly corporates are leading the way. The fashion brand Burberry recently announced they will source all their electricity from renewable energy and the first showroom solely dedicated to electric vehicles featuring BMW and Nissan just opened in Milton Keynes.

Meanwhile, the Government has been noticeable by its absence in the climate change debate. But in a positive move, the Climate Minister Claire Perry announced a clean growth plan for the UK in the autumn. Hopefully we can and will avoid the worst scenarios of excessive heat, droughts and floods. But, the first step is for all of us to start talking about the weird weather and why it is so important to fix the problem.